Jesteś tutaj: Start » BLOG » Renting a car in Tenerife, or how not to get into debt when borrowing a car 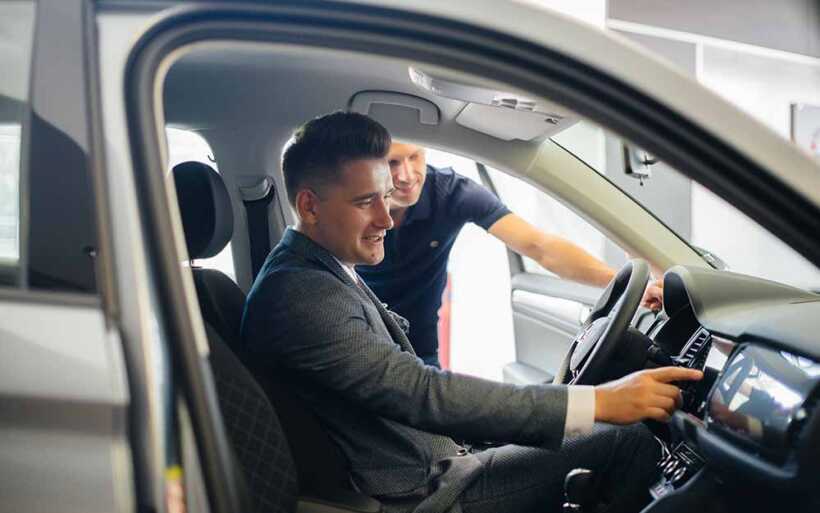 If you ever rented a car, you probably know that you need to be very, very careful. Renting a car in Tenerife can drain your wallet. Quite literally. I learned it the hard way and I want to tell you my story so you can avoid it if you ever plan to use a car rental on the island. Take Europcar, for example.

Looking for an online car rental in Tenerife, or a sting in the tail

It couldn’t have been easier to find an online car rental in Tenerife. There are countless car rentals on the island, and then there are comparison websites – competition is flourishing. I needed a rental car for three days. After half an hour, I already had a winner on my shortlist – I used Carflexi, a well-known intermediary, and found quite a good deal (by Tenerife standards) from Europcar. Europcar is a large, well-known car rental based in France. I selected my car, paid the rental deposit and after a few minutes, everything was done. And I received my confirmation.

Payable at the car rental.

* Check Driver’s Requirements in that location, as well as the Payments section with details concerning credit cards accepted and amount of guarantee to be booked/charged to the driver’s credit card, in accordance with the terms and conditions accepted by you and sent to you with this voucher.

So, all I needed to do was to go to a Europcar car rental, pay EUR 94.88, make the deposit and pick up my car. OK, so Carflexi failed to mention that EUR 94.88 did not include VAT, I will let it pass. Maybe they didn’t have to? After all, I am writing about renting a car in Tenerife, not in Poland.

The Europcar car rental had an excellent location and seemed reliable. The office was nice and the staff polite. And since the sales assistant serving me was so nice, he immediately started to do everything he could to make things easier for me. Why should I pay 800 euros in deposit? Why should I be liable for any damage? I don’t have to because he has a wonderful offer for me – an extrainsurance policy where the deposit is down to 100 euros and I bear no liability at all. And he (that nice sales assistant) will write everything down for me.

He took a piece of paper and started to present his offer and the figures. The offer did seem good, especially that the price given on the piece of paper was extremely attractive:

So, I asked him to definitely put it on my bill and I paid with my credit card (without as much as looking what is what and why I need to pay it; time was running up; I had a friend waiting for me in front of the car rental and he was in a hurry to catch his plane). Had the circumstances been different, I probably would have given it more thought. But with the time pressure and my natural trust in people, well, I hadn’t done that – my mistake. I went to pick up my car.

The “supercar” in a nice packaging, or why you should always check the car parameters when renting a car in Tenerife

A Volkswagen T-Cross emerged from the underground garage. It appeared to be new so I was glad that I would spend the next three days in a nice car without any signs of wear and tear. As I was leaving the city, I was not suspicious at all – I was driving from one roundabout to another one, the traffic was heavy, so I was driving super slowly.

The real fun started when I hit the highway. As you know, Tenerife is not flat. Quite the opposite, in fact. And as I was driving up the first tiny hill on the highway, I started to ask myself desperately:

Why is that damn car not going?

Well, it couldn’t have been going. Because it was “super” powerful. It squeezed all 65 KW. Out of its 1.0-liter engine.

I know, I know – it’s all my fault. I could have checked it. It never occurred to me that cars like that still existed and could be rented. So, if you are planning to rent a car in Tenerife, check its parameters. After all, you are going to drive through the mountains and hills too. And believe me, dear reader, driving such a “powerful” car in the mountains is an agonizing travel to the past. An experience I want to spare you if possible. Don’t let appearances fool you:

in real life, it was far from being fair. Not in Europcar. After just a few kilometres of driving, I noticed that the fuel gauge needle stopped moving and got stuck. But somehow it still had a long way to go:

So much about fair fuel policy… the car didn’t even have 3/4 of a tank of fuel.

You might say, it’s not a big deal but I needed to stop the car, take a picture of the fuel gauge and send it to the Europcar car rental. If I hadn’t done that, you know what would happen next. After all, the car rental has my deposit and they know how to use it. How else would I have proven upon return that the car had the amount of fuel it had? It is obvious that in such a situation claiming anything without evidence would be a lost cause.

Of course I do not know whether it is a common practice among the Europcar staff who hope that the people renting cars are absent-minded and not careful enough, or a simple mistake. I really want to believe it was a mistake but if you keep on reading, you will understand why it is so hard for me to believe it…

Returning a rental car is the most pleasurable experience you can imagine. I simply drove to the underground garage. A staff member appeared in a minute and took the keys from me. He was 10 meters away from the car and he was completely disinterested.

He didn’t inspect it, look for any scratches or dents or check whether it was clean inside. It’s as simple as that – if the car make, the colour and registration numbers are right, the car is considered to have been returned. So it was time for me to go to the office and get the bill. 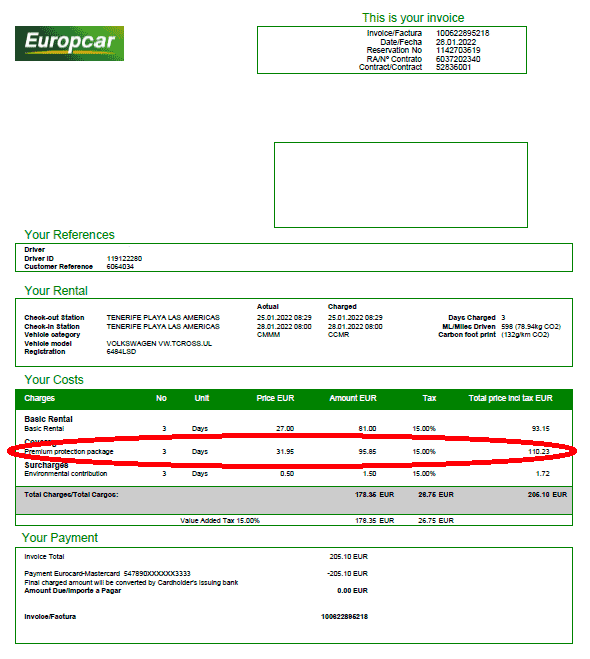 I highlighted the passage which shows that the daily rate for extra insurance which the employee scribbled on a piece of paper only three days earlier got an extra digit. And magically 3.95 euros turned into 31.95 euros. Including VAT.

And this is how Europcar, or rather the employee who gave me the car, have taken me for a ride and tricked me out of 100 euros.

Obviously there is no way for me to prove it to Europcar. Which is why this article will be sent to the Europcar headquarters in France. Maybe it will help. However, I am afraid that their fair customer service policy may be just as fair as their fuel policy.

The Europcar Headquarters, after reading the description of the situation, sent an apology and a promise of a refund of any overcharged car rental fees in Tenerife. It’s nice of them, however – finally the promise was not met. Yet another intervention was neeeded to see a bank transfer, here is a proof: 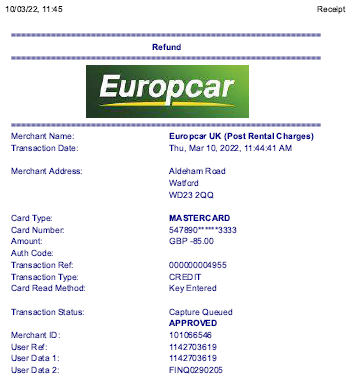 We can say that Europcar has shown it’s honesty though they neened a little push. To be honest, I would expect some nice gesture from Europcar, showing that they care about their clients, that they are able to solve problems in an elegant way. Unfortunately none of that happened. I guess Europcar assumed, that a money refund solves the problem. Basically yes, however the company missed an opportunity to build up its PR with a minimum cost.

A simple offer of a free rental of a premium car for a couple of days (for example a high-class 4×4 SUV) could result in a conclusion right here, that Europcar can apologise injured clients in a very elegant, classy way.

Lastly – I appeal to all the people, who are going to use any car rental services, no matter what provider – pay attention to all the costs of the service. And check fuel level before leaving car rental park! 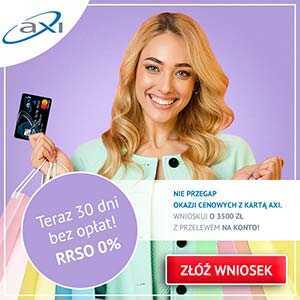 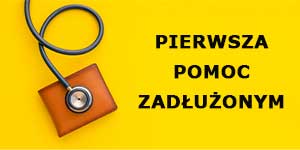 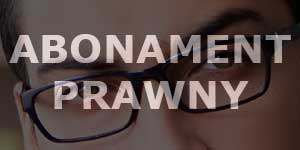 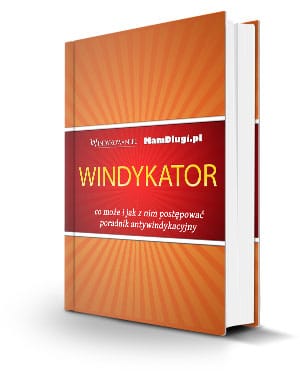 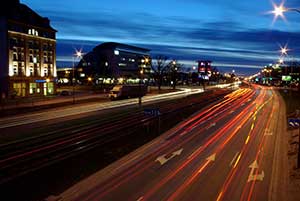 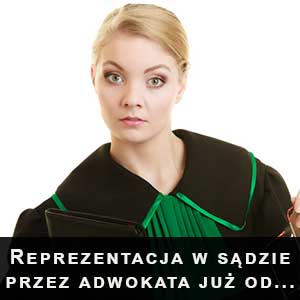